Catfish are at home around the globe. The term covers a variety of fish of all sizes. In biological systematics these are called catfish (Siluriformes).

It is striking that catfish do not have scales, but there are a number of species (families) whose bodies are armored with bone plates. Characteristic are also the barbels around the mouth of the catfish, which are not only used for orientation but also have taste buds. The mouth opening mostly points downwards, so that the animals can take in food from the ground easily. Many catfish are also equipped with thorns in front of the pectoral fins and dorsal fin, which are supposed to protect them from predators.
Catfish are characterised by a heavy head and a reduced swim bladder, so that they are optimally adapted to life on the bottom of a water body. Another special feature of many catfish is that they cannot absorb oxygen through their gills alone, as they have what is known as accessory respiration: If a catfish swallows air, it absorbs additional oxygen via the intestines.

The natural habitat of the Catfish

About 3,800 species of catfish, divided into at least 40 families, are currently scientifically described worldwide. However, new species are added every year and it is currently assumed that many thousands of catfish species have not yet been described and many have not even been discovered. Catfish are mainly found in fresh water, but there are also species that live in coastal waters. The highest diversity is found in South America, followed by Asia and Africa, which means that many different species are found there. Most of them live in shallow flowing waters. However, catfish are also among the fish that have discovered caves for themselves and successfully colonized them. 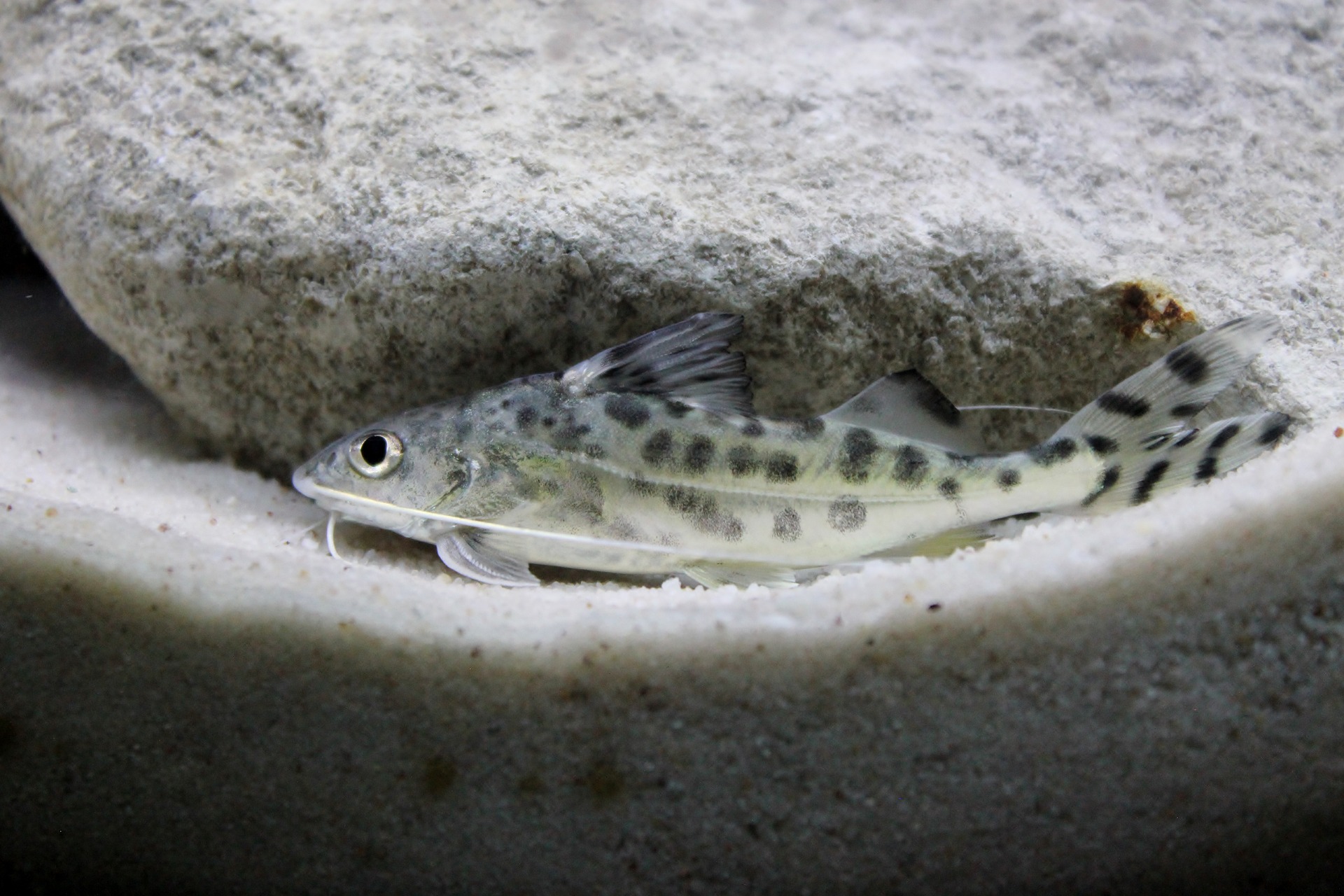 Catfish in an Aquarium

Not all catfish species are suitable for aquarium keeping. Some specimens simply become too large, such as the European catfish (Silurus glanis), which is native to our country and can grow to an impressive 3m long. Therefore it is important to find out exactly which length the adult catfish can reach before you buy it. It should also be noted that most catfish are active at dusk or at night. But there are also day-active specimens that can be observed well.

Species suitable for the Aquarium.

Catfish from tropical areas are particularly popular with aquarium keepers. Mainly freshwater fish from America, Africa and Asia are kept.

Tropical freshwater catfish from Central and South America are at the top of the popularity scale among aquarium hobbyists. Six families are particularly well suited for keeping in aquariums.

The species-richest family among the catfish currently comprises almost 1,000 described and estimated species, which are certainly just as many, which are still undescribed. The smallest loricariid catfish grow to a size of only 3 cm, while other species can reach a length of more than one meter. The L-numbers, derived from the Latin name Loricariidae, were introduced in the DATZ in 1988 in order to be able to assign species that have not yet been described or cannot be clearly identified. Today, there is a wide range of species available in the trade and from domestic breeders, so that the responsible aquarist no longer has to resort to wild catches. This is especially true for one of the most popular species, the zebra armoured catfish (L46), which is not only affected by the construction of the Belo Monte dam (https://de.wikipedia.org/wiki/Belo-Monte-Wasserkraftwerk), but is also listed in the current Red List as “threatened with extinction” for aquarists (exports are currently only illegal!).

Popular Loricariid Catfish for the aquarium

Loach catfish are characterized by a slender and elongated body. The Trichomycterus alternatus, for example, which grows to a length of about 10 cm, is suitable for keeping them in an aquarium. This pretty species is characterized by the fact that males and females have a very different coloration.

Loach catfish reach a size of 7 to 24 cm and live mostly as single individuals animals. In contrast, Corydoras are sociable animals, which should be kept in a larger group in the aquarium. Most species grow to only 2 to 8 cm in size, so that Corydoras catfish are ideal for aquarium keeping. With their barbels they dig through the sand for food, which is why Corydoras catfish should never be kept with coarse gravel, but preferably with fine sand as a substrate.

Popular Corydoras for the aquarium

Frying pan and banjo catfish are twilight and nocturnal fish that bury themselves in the bottom substrate during the day (also for these species, only sand is used as bottom substrate). They are perfectly camouflaged thanks to their body structure and colouring, so that you have to take a close look in the aquarium to find them.

Thorn-catfish and false thorn-catfish are externally similar because of its far forward sitting back-fin. Of the mostly twilight- or nocturnal fishes, especially the conspicuously colored Jaguar Thorn Catfish (Liosomadoras oncinus) is often kept in the aquarium.

Among the catfish originating from Asia, which are suitable for keeping in aquaria, are the glass catfish (Kryptopterus minor), the large-mouth catfish (Chaca chaca), which, however, can only be socialized to a very limited extent, and the shark catfish (Pangasius sutchi), which belongs to the group of slim catfish and is only suitable for large aquaria. The Indian glass catfish (Kryptopterus vitreolus) is endangered in its population, therefore a responsible aquarist should better refrain from buying this species, as it is a wild catch.

In addition to American and Asian fish, catfish from Africa are also available for keeping in the aquarium. One of the most popular glass catfish for the aquarium is the swallowtail glass catfish (Pareutropius buffei), which originates from Nigeria. In addition, feather-beard catfish are well suited for larger tanks, such as the cuckoo-bearded catfish (Synodontis petricola).

The right food for catfish

The many different species of catfish make it difficult to make a general statement about the right food. In a natural environment catfish eat everything they find on the ground: Algae, small crabs, micro-organisms, larvae and insect eggs. Catfish are mostly omnivorous. When keeping them in the aquarium, a combination of live food, frozen food, vegetable food and dry food is therefore recommended. Some loricariid catfish also need roots (e.g. bogwood roots) or wood and leaf material from various plants (cf. NATURDO – leaves, barks, wood), from which they scrape off the biofilm (fungi, algae, bacteria) that develops there.

Catfish offspring in an Aquarium

The optimal conditions for breeding catfish are to be inquired individually depending on the species. A common feature of many species is that they use caves for spawning. Since many catfish also take care of their youngs, breeding them is easier than with some other fish. Decapsuled Artemia eggs or bosmids are recommended as breeding food, while herbivorous catfish are best fed dry food with spirulina (e.g. SAK spirulina). If you want to set up an aquarium for catfish breeding, it is best to offer the fish a whole set of spawning burrows so that the catfish feel comfortable and the probability of successful breeding increases.

Caves made of clay for L-catfish