A recurring controversial topic in the breeding of witch catfish are their caves or tubes.

Again and again it can be read that witch catfish prefer special catfish tubes with certain dimensions. One could see in breeder circles the most different models at tubes, caves or bricks from clay and natural bamboo. In almost all of them differences in care and breeding could be seen.
To see were PVC pipes stacked and glued with silicone, catfish caves which were stuck with the closed end in the gravel or sand soil, the brick made of clay, which was provided with various holes, bamboo pipes which were weighted down with stones on the ground and much more.

But here and there the witch catfish were also to be seen in the tubes. It is to be determined, the open tubes from clay, the brick with various continuous openings (drilled holes) was rather the place for the brood care.

Here we offer catfish tubes with different lengths and inner diameters. Because a brick in the living room aquarium is not so suitable and also not an eye-catcher. With this variety it should be possible to give these special aquarium inhabitants a home close to nature. Some tube models were made to fit the suspended tanks. This gives you the possibility to follow the breeding of witch catfish even more intensively. To increase the chances of breeding, we recommend placing different models in the aquarium ranging in length and diameter. The witch catfish will look for its suitable tube, as with other loricariid catfish species. 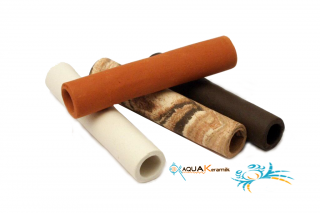